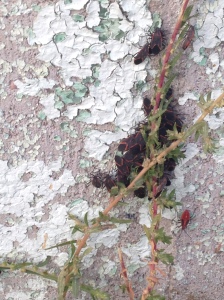 Boxelder bugs gathered together on a home’s foundation.

Daylight Savings time is ending and it is time to ‘fall back’ once again. Fall brings about cooler temperatures, changing leaves, and boxelder bugs by the millions. Find out what you can do to help keep these pests from invading your home.

Depending on where you grew up, the boxelder bug can have many names. Some of the more common ones include; maple bug, democrat bug, populist bug, and politician bug. Regardless of what you call them, they are annoying to say the least. The boxelder bug gets one of its common names from its primary host plant, the female boxelder tree. They can also be found on ash, and maple, and occasionally feeding on strawberries, grasses and other plants. The adults are ½ inch long red with black coloration under their wings. This time of the year they begin to cover the south and west sides of homes and try to make entry inside any way possible.

The cycle all begins in the spring. After emerging from overwintering sites, the adult females lay eggs onto the host plants. The bright red nymphs (see the photo), immature bugs, hatch from the eggs in about 2 weeks and begin to feed on plant sap until mid-summer when they mature into adults. The adults lay eggs for a second generation of boxelder bugs. After the second generation matures, the adults seek out warm overwinter sites, to start the cycle over the following spring.

Homeowners become more familiar with these insects in the fall. When looking for overwintering sites, boxelder bugs often find their way into buildings and homes through small cracks and crevices. Once inside the home they are more of a nuisance than anything else. They do not bite, damage food or any items in the home, or reproduce, but they can stain curtains or walls, especially when squished.

Trying to control these insects can feel like a losing battle. While it may be tempting to remove the boxelder trees from the premises, it won’t control all of your problems. The adults are good flyers and can still invade homes from considerable distances from the host plants. The plants are rarely injured seriously enough to justify insecticidal control, but using an insecticide spray on the nymphs can reduce the number that reaches maturity. The most commonly used control method is to use an integrated approach of sealing cracks and crevices and to use a perimeter spray around the exterior foundation and thresholds of the home.

Once they are inside the home, the vacuum cleaner will be the best technique for control. To keep from having to dump or change the vacuum cleaner bag after every use, place a knee high panty hose or trouser sock over the end of the hose before you put on the attachment end. This ‘trap’ collects the insects so they don’t have to go all the way through the vacuum and helps to keep your machine from smelling like boxelder bugs and multi-colored Asian lady beetles every time you turn it on.

Just like the boxelder bugs it’s time to start preparing for winter and get ready to emerge in the spring to start all over again.