You know what they say, April showers bring May flowers, weeds, and earthworms. The last two usually aren’t part of the rhyme, but this year we will make an exception. Find out what you can do to make sure the May flowers in your lawn aren’t unwanted weeds and how to keep earthworms under control. 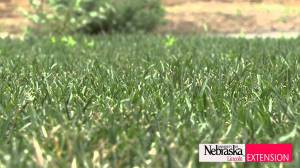 The lawn we all wish we had…

Warmer than average temperature have bumped up the timing of many of our tasks on our to-do list. Soil temperatures are a few degrees warmer than normal. If you wanted to apply a preemergence herbicide to control crabgrass, you might want to put it down a bit sooner than normal. Crabgrass, the main target for early season preemergence herbicides, needs a minimum soil temperature of 50 to 55 degrees to germinate. Normally that soil temperature is reached the end of April or the beginning of May. This year, however, we have reached those optimum germinating temperatures a bit sooner than expected so be ready.

Split applications might be needed for a longer control window. Aim to put down half the highest recommended application rate on the label now and the other half in June for season long control of weeds. One application now probably won’t last throughout the entire growing season because of the earlier application window. Be sure to water in the product after application to keep it from degrading in the sun. The three most common active ingredients in preemergence herbicides are dithiopyr, pendimethalin, or prodiamine. When choosing a product to control crabgrass, look for one of those active ingredients. University of Nebraska-Lincoln research has shown that they are all equally effective in controlling crabgrass.

The good kind of worms

Just as you have been busy this spring, the earthworms have also been busy. The activity of earthworms often creates a rough and bumpy lawn surface that can be both annoying and dangerous. The small castings left on the soil surface by earthworms are only one factor that contributes to lawn bumpiness. Earthworms are valuable to the overall health of the lawn. Their activity improves the turf increasing air and water movement in the soil and they help decompose organic matter and alleviate compaction.

There are no pesticides labeled for the control of earthworms. Although some pesticides and fertilizers are known to have an impact on earthworms, none can be recommended as controls. Today’s pesticides have relatively little impact on earthworm populations, in part because of the registration process that examines adverse environmental effects such as mortality to beneficial, non-target organisms like earthworms.

Various lawn care practices can help reduce the problem of a bumpy lawn. Bumpiness in sparse, thin lawns will be less noticeable if a healthy thick turf is reestablished through reseeding with a species and variety suited to the site. Proper fertilization, mowing and irrigation of the site can also help. Mechanical means to reduce bumpiness will be necessary to eliminate existing roughness. Core aerifying, power raking and verticutting are all mechanical processes that will break down some of the bumps in the lawn. Roughness accumulates over several years and it should be gradually removed instead of all at once. Using a heavy roller can cause some longer term issues. Rolling may remove some roughness, it also damages the turf by compacting the soil. Compacted soil reduces turfgrass vigor and eventually leads to a thinner lawn.

Although rough, bumpy lawns and earthworms on the sidewalk are annoying, don’t let it dampen your spirits.

My Tweets
Join 1,463 other followers